Unfortunately, the majority of kitchen exhaust fans can only extract vapour and steam effectively but they can hardly cope with airborne grease and bad smells. 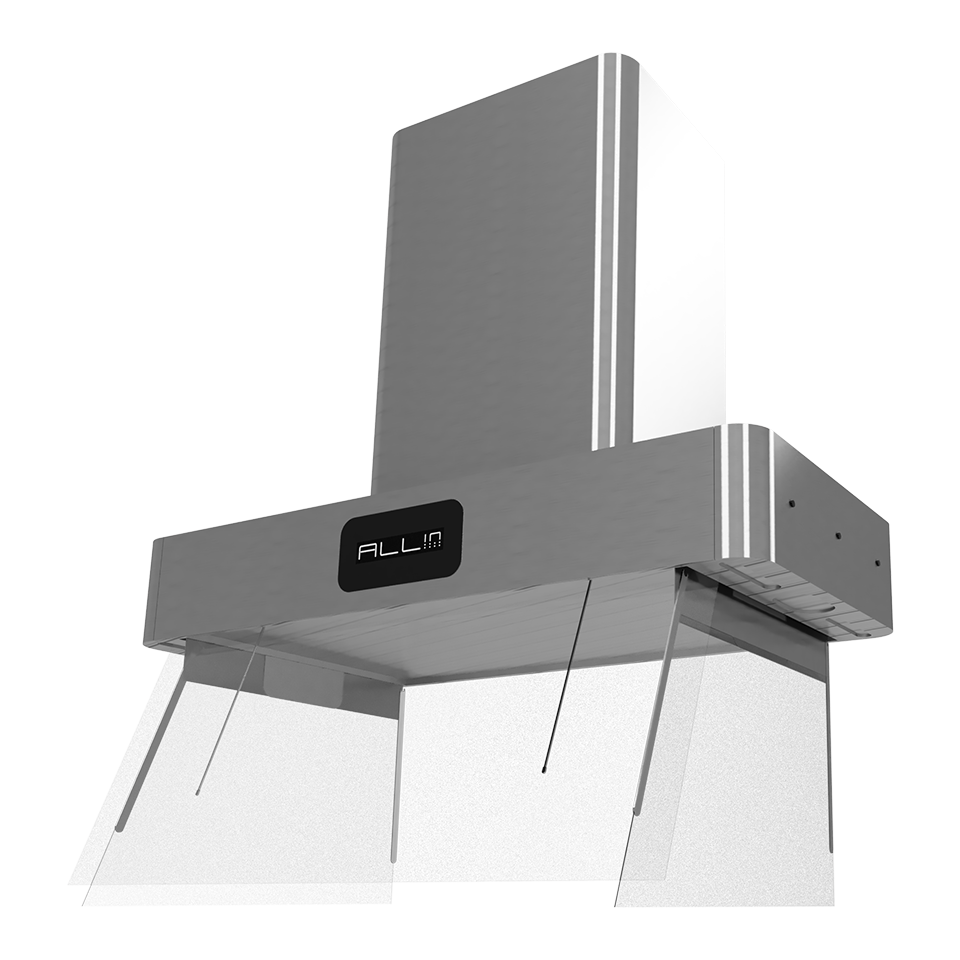 ALLin Kitchen Ventilation approaches this problem from a different, new perspective. During the design process, Dr Hunor Sántha put the research and development’s focus on the molecules ultra-high molecular weight. Thus developed revolutionary and modern exhaust unit, even if adjusted at a low fan speed, guarantees a 100 percent smell-free kitchen.

Let’s find out the secrets!

What is wrong with other kitchen extractor fans on the market?

One of the problems is that the so-called premium kitchen exhaust fans only absorb water vapour and 75 percent of oil and fat molecules. That makes them unfit for being a good extractor since the human nose can detect and consider unpleasant even 1 percent of released smell. An average household produces 4 litres of airborne grease in a year, so it is easy to do the maths and realize that the remaining 25 percent of airborne grease – almost 1 litre – ends up in the space around the extractor fan.

That means that almost one-quarter of the – let’s face it, not so appealing – airborne grease gets onto your furniture. (At least according to the currently available kitchen extractor fan options on the market.)

1 litre of fat per year….it is horrible just to think about the thick layers of grease that settle on your furnitures. It is a nightmare to get rid of them. Not to mention the damage that the combustion products and charred particles could cause to your respiratory system. That is the seemingly unsolvable problem that concerns most of the households where people cook and bake a lot.

Other kitchen exhaust fans with different construction – unlike their promising name – are not capable of extracting the bad smells that go hand in hand with cooking and baking either.

Have you noticed that the minute you start to bake or cook, the smells permeate your home? The explanation is simple: steam and hot particles released from the pan follow an irregular motion that forces them to spread out not only upwards but, as an inverted cone, in every other direction as well.

This smell can only be removed with long aerations, that, however, raises the problem of wasting. In wintertime warm air escapes while during summer – if the flat is climatized – rooms get warm at a moment’s notice. For those who cook and bake hours on a regular basis, this could add up to be almost 3000 EUR of a pointless waste of money in 10 years.

These problems seem to have been unsolved for years.

Now let’s see what the modern world offers as a solution! 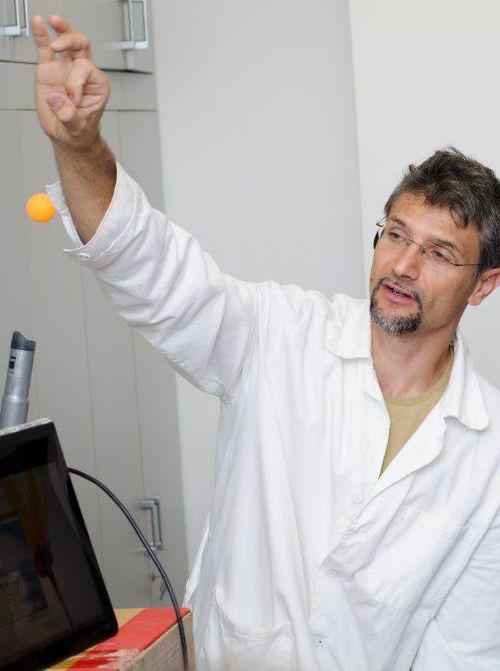 Dr Hunor Sántha couldn’t have got his “enlightenment moment” without his previous laboratory experiments and their family kitchen renovation. These experiences gave him the idea to replace normal kitchen exhaust systems with specially designed extractor fans, that can extract airborne grease as well. That is how the idea of ALLin Kitchen Ventilation System was born.

Kitchen extractor fans’ new, and finally unquestionable, working principle is based on the fact that fat molecules are 30 times heavier than air molecules. Thus, it is logical that they couldn’t be collected with ordinary kitchen exhaust fans’ air circulation in a quiet and energy-efficient way. Also, that is why it is impossible to prevent bad smells permeating the whole flat in the old-fashioned way.

This problem has already been eliminated by ALLin Kitchen Ventilation concept’s first “manifestation”, the so-called Curty, a specially stiffened foil that was applicated on the exhaust fan.

If an exhaust machine wants to guarantee a 100 percent smell-free result, the surface of the kitchen extractor fan should extend 1 meter in every direction (left, right, forward and backward) beyond the cooker itself. A motor that is twice or three times more powerful – and obviously much louder – wouldn’t solve the problem on its own.

However, Hunor wouldn’t have been a true inventor, if he had been satisfied with this. While he was selling roughly 50 pieces of Curty, he soon realized that the demanding work of promoting a new (= unknown) product is far from profitable. So, he came to the conclusion that he must come up with a complete kitchen extractor fan that solves the “smelly kitchen problem” once and for all.

What is the secretof ALLin Kitchen Ventilation?

ALLin Kitchen Ventilation emerged from the fusion of Curty and ordinary kitchen exhaustion, and it opens a whole new chapter in the history of kitchen technologies. And this is not an empty phrase.

Here is the proof. When Curty’s first recurring customer, Szilvi had learned that we had diverted our focus and spare capacity from the production and marketing of Curty to developing ALLin full-on kitchen extractor systems, she joined our project as an ambassador for ALLin products. Her motivation was simple. She was so satisfied with our product (and with the fact she finally eliminated bacon odours from her home) that she offered to assist our company. Since then she has been working with us as a commercial director.

Why is this kitchen ventilation system

ALLin Kitchen Ventilation is the most modern kitchen extractor fan that completely deserves its name.

Besides, our kitchen exhaust fan has an ergonomic design and ambient lighting that make cooking and baking even more enjoyable.

No matter how tall the cook is, the level of the front foil is height-adjustable which makes it suitable and comfortable for everyone. Furthermore, the maximum ventilation noise level in turbo mode is only 40 decibel. This equals the background noise of a library, thus you don’t have to worry about the risk of hearing impairments.

Since ALLin Kitchen Ventilation system prevents both vapour and bad odours, you can say goodbye to unnecessary ventilation.

Also, your furnitures won’t have a thick layer of airborne grease on them so you don’t have to bother with constant cleaning. Which means, ALLin Kitchen Ventilation saves you money and time as well.

Test the product with us!

Learn more about our product and download our order manual.

Kitchen ventilation for 100 percent food smell-free kitchens. It is possible!

What is wrong with the ineffective kitchen ventilation systems of today?

Energy efficiency at the highest level

** ZOOM LEVEL: 100 MILLION, REPRESENTAIONS ARE TO SCALE TO EAC OTHER

However, the molecular mass of airborne grease is 30 times higher, their average momentum is almost 8 times higher. Thus, only a physical barrier can stop and effectively deflect the grease fumes into the kitchen extractor. Without physical deflector surfaces protruding from the flanges, regular-sized kitchen exhaust fans could only capture water vapour efficiently.

Save money and enjoy the odour-free, perfect cooking experience!

It guarantees a perfectly odour-free home.

Without unnecessary ventilation, you can reduce your overhead costs.

You no longer have to worry about airborne grease marks on your furnitures. This significantly cuts your cleaning time..

With a low noise level, cooking becomes a bigger experience. You can even listen to classical music pianissimo while standing next to the stove.

Oil and fat molecules don’t only damage your furnitures, they also make your hair and skin more likely to get greasy and oily, and, in bigger quantities, they harm the nasal mucosa as well. Using ALLin Kitchen Ventilation creates a healthier surrounding for your family and yourself.

If you are designing a modern kitchen these days, detailed planning, including the extractor fan, is essential. A poorly chosen equipment can be quite a disaster. If it doesn’t function properly and it is too loud you will soon find yourself not using it at all. Not to mention, that the constant ventilation you’ll definitely need is literally like throwing money down the drain.

Get a request for quotation for my ALLin Kitchen Ventilation

Get a requestfor quotation for my ALLin Kitchen Ventilation